This three-story house was known as “Svojina” (Engl. “Property”, because it was the property of the Serbian Orthodox Church), and it was built in the early 1800s, in Neoclassical style. Its yard wings were visible on an 1830 gravure, a part of the Museum of Vojvodina collection.

In the late 18th and early 19th century, the seat of the Serbian Orthodox Parish was in this house. It was reconstructed after the 1849 bombing and the City Magistrate moved to this house in 1852, and it stayed here until 1871. The District Courthouse was also located in this house for a period of time, in the late 19th century.

This building has a U-shaped floor plan, with left and right yard wings and a gateway in the middle of the street facade.

The street facade has 14 symmetrical windows on each floor, and on the ground floor, there are six shop windows on each side of the gateway. The facade is decorated in Neoclassical style, dominated by a high semicircular attic. This attic was added between 1895 and 1899.

The last window to the left, on the first floor, is a kibic fenster.

The yard wings of this house, create an atrium-style courtyard, with the house in Ilije Ognjanovića 22.

In 1901 a photo studio was built in the middle of the courtyard, as a one-story house, with a long rectangular-shaped floor plan. The blueprint was done by Anton Tikmajer.

Later the photo studio was transformed to one of the first Cinemas in the city of Novi Sad, and it worked from 1912 to 1930. 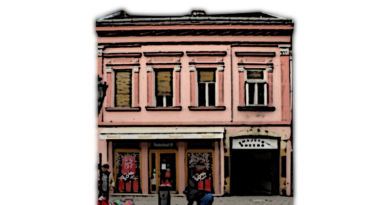 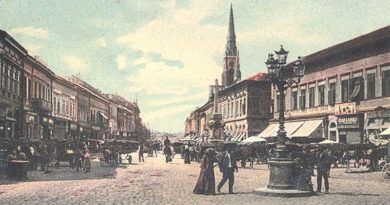