The one-story residential house with an almost rectangular base was built on the regulation line of Štrosmajerova Street. The passageway-corridor divides the ground floor into two unequal parts, which according to their constructive solutions, spatial organization and the rhythm of the window openings towards the street, lead to the conclusion that it was originally two buildings. The roof is high and complex, over the front part is gabled, towards the courtyard, over the right part on one, and on the left, on two gables, covered with pepper tiles. The part in between is covered with corrugated sheet. Each part of the building has a separate vaulted basement. The right, narrow part of the building, as well as the corridor, has flat ceilings. In the left part, the central rooms facing the street are vaulted with cruciform vaults supported by massive split ports, while the rest have a flat ceiling. At the end of the brick-paved passage of the old format, there is a segmentally finished entrance to the corridor from which the staircase to the first floor is approached.

This corridor is paved with stone blocks, while the staircase has wooden steps. Along the side walls there are handrails made of wrought iron, and on the parapet wall there is an opening in the form of a lintel with a grate, also made of wrought iron. The landing on the first floor is paved with stone slabs of a larger format. Opposite the main building, in the width of the plot, there is an auxiliary ground-floor building with a pitched roof, covered with corrugated iron. On the ground floor of the main building, there used to be bars, to the right of the inn’s entrance, and to the left a colonial shop. Until the 80s of the 20th century, there was still a preserved frame of the former portal on the left side, which was replaced by a window opening.
The facade with decorative elements in the art nouveau style was probably created during the renovation at the beginning of the 20th century. The decoration represented in the upper floor area is reduced and consists of geometric elements of simple profiling performed around window and ceiling openings. Shallow joints are drawn on the flat, plastered surfaces of the street facade. The horizontal division is emphasized by the profiled inter-floor and cordon cornice above the floor windows, as well as the stepped profiled attic cornice. The architrave-finished entrance is treated in imitation of alternately dropped stone blocks with an accented keystone.

The plaster frames around the windows were also solved in a similar way with simply made joints that imitate the style of stone hewn.

The time of construction of the building cannot be determined with certainty, but based on the preserved structural solutions and details, such as vaults in the ground floor and basement and the stone frames of the cellar door, characteristic of the 18th century, it is indisputable that it is a multi-layered building that has undergone several developments over time phase. 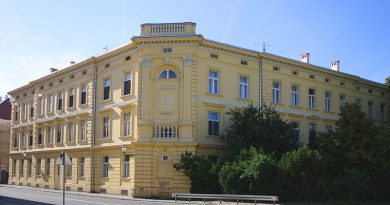 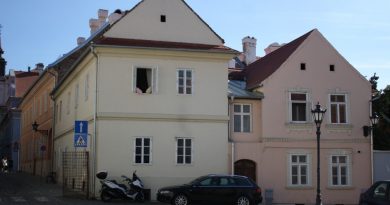