A one-story corner house known as “Kod Ikone”, built in the Romantic style, with a base in the shape of the Cyrillic letter “Г”, in 1853 for the owner Maria Trandafil. The house was burned down during the bombing in Buna, then rebuilt in the Great Renovation.

The “Kod Spasitelja” Pharmacy was located in the corner bar for decades.

The great Novi Sad philanthropist Marija Trandafil lived in this house, who, among other things, rebuilt the Nikolaev and Armenian churches, and from whose bequest the present building of Matica Srpska was built, originally the Institute for Serbian Orphans.

You can find out more about the life and work of Novi Sad philanthropist Maria Trandafil in the documentary from the series “Heroines and Heroes of Novi Sad”:

The manager of Marija Trandafil’s property, Luka Jocić (1836-1926), bookseller, publisher and officer, writes about her daily life in this house:

“She sat in her extraordinarily clean and spacious rooms for the whole holy day. Only when a famous lady came to pick her up, and then she liked to listen to the newspapers that were being circulated around the town… She never went to the court or the town hall When it was necessary for her to sign, an official came to her apartment, and she paid a gentleman’s fee for that case… She herself did not read any newspapers, not even Serbian ones. Her only entertainment was German books, which she with great reading comprehension.

The corner street facade is dominated by the Icon in a semicircular niche, at the very corner of the building, after which the new residents called it “Kod Ikone”.

The main facade in Pašićeva Street has 7 vertical openings, of which the middle 3 are on the ridge, flanked by shallow pilasters. The facade in Grčkoškolska has 3 vertical openings. At the very corner of the building is a balcony with a wrought iron fence.

The facade canvas is plastered flat and ends with a prominent profiled roof cornice.

On Sauter’s plan from 1889, the house “Kod Ikone” is marked on the corner of what was then Školska and Ćurčijska.

The house “Kod Ikone” in a photo taken around 1900, with the pharmacy “Kod Spasitelja”. In the picture we see decorative elements around the upper parts of the windows, characteristic of Novi Sad houses built in the romantic style, such as Dunavska 33, Pašićeva 12… Today, those elements are no longer on the facade. 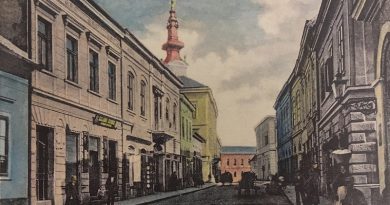 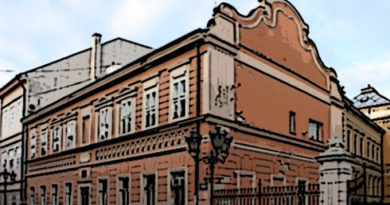 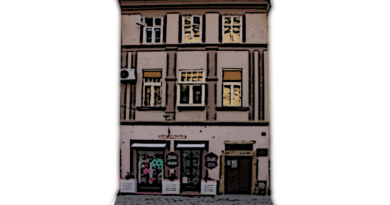