Part of this street from Trifkovićev trg to Masarikova, we can see in the picture above, can be found in the city plan from 1745, while the part from Trg Slobode to Trifkovićev trg was breached and built at the turn of the 18th and 19th centuries. This later part of the street was built on a large plot that was assigned to the Roman Catholic church community at the time when the Novi Sad fell under the administration of Bac-Bodrog County in 1727.

The construction of this part of the street began when German merchants, refugees migrated from Belgrade, after its fall under the Turks. By the end of the 18th century, the street had its current contours. At the time when it was completely built, the street was named Fazanova, after the large inn “Kod Fazana”, which was located on the site of today’s music school, and we can see it in the following picture at the time when it was still a one-story building:

The old inn “Kod Fazana”, where theater performances were held throughout the year, was bought for the so-called “kloster” – a women’s school run by Roman Catholic nuns. Today, the music school “Isidor Bajić” is in that building.

Another old inn in this street has left a deep mark in the cultural and political life of the city, and that is Bela lađa, which was located in Njegoševa 5. It was first mentioned in 1810 as Alba navis.

In the bombing in 1849, during Buna, this was one of only 6 houses in the city whose roof did not burn down. Siegfried Kapper, who visited Navi Sad in 1850, immediately after the bombing and stayed in the Inn Bela Ladja (White Boat), wrote down in his travelogues:

“From the main square (Trg Slobode) we turned into one side street, if two rows of ruins can be called that at all. Miraculously spared, a one-story house with an undamaged roof rises in the middle of those ruins. One small blue board says that it is the inn “Bela lađa”, currently the best, since it is the only one, hotel in Novi Sad; previously, this inn probably did not receive guests at the hostel. It was only thanks to the luck, that an ordinary, miserable and penitent inn, which poor peasant coachmen used to come to look for a place to stay for themselves and their horses, gained in importance and reputation and became something like a town hotel. I asked for one room; since they first sent me from one to the other, they gave me a damp room next to the stable, which was just big enough to hold two wooden frames, which were supposed to be something like two beds, and two wicker chairs, so there is just a little space left to stand…”

In the next few decades the Street was bearing the name Bela lađa, after this inn.

In Njegoseva Street 22, the Hungarian State Women’s Civic School was built in the 1880s, which became a general state school in 1919, and it housed the then founded Women’s Gymnasium. Today, the “Svetozar Markovic” Gymnasium is in this building.

At the address Njegoseva Street 2, on the corner with Trg Slobode, there is the Iron Man Palace. The Magistrate was in this building during the Buna, in 1849, but as it was half demolished in the bombing, the Magistrate was temporarily returned to the old dilapidated town house on main square Trg Slobode, which Siegfried Kepper talks about in his travelogues.

Njegoševa Street changed a lot of names, starting with Fazana Street, then Bela lađa Street, and in the 1890s, the street got its third name, but not after a tavern, but after a politician. This time, it was named Andrasijeva Street after the former Prime Minister of Hungary, Count Julia Andrasi. After the First World War, it was named Njegoševa Street, and during the occupation, Andrasijeva again. After the liberation, the name Njegoševa was returned, which this street still bears today. 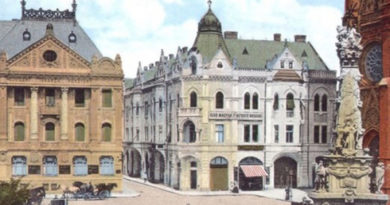 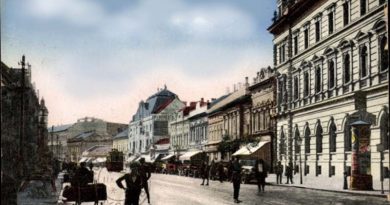