This two-story house, with a rectangular-shaped floor plan, was built in the 18th century. It is one of the oldest houses in this street. The rectangular-shaped house on the 1745 map of Novi Sad could be this house. The house had sustained extensive damage in the 1849 Uprising bombing, sharing the destiny of most buildings in the city center, and it was reconstructed in the early 1850s.
A professor and writer Aleksandar Sandic (1836-1903) was the owner of this house, with the old inn “Crni Jarac”  loved by writers, students, and bohemian milieu, in the second half of the 19th century. This inn works to this day, and for the past few decades, it bears the name “Ribar”, in the right side of the ground floor. In 1874, a socialist and writer Vasa Pelagic (1838-1908) lived on the first floor of this house, when he was arrested. At the end of the 19th century, the owner was a tailor Nikola Prodanovic, in 1938 it was Milan Prokic, and after the WWII, dr. Djordje Djermanov.

A traditional filigrain and jeweler Marian Petrovic’s craft shop is on the left side, for more than 50 years.

The house bears the features of the Neoclassical style, with a shallow avant-corps as wide as the three windows in the middle.

In the middle of the ground floor is a pedestrian passage with an old double-wing wooden door. Next to it, on both sides are traditional shop-openings, two on each side, placed in simple stone frames, protected with rare original double-wing wooden shutters.
The filigrain craft shop, on the left, is a unique example of an authentic Novi Sad old town shop, at the turn of the 18th and 19th centuries.

On the first-floor avant-corps the middle window is flanked by pilasters, and the other two with faux rusticated stone.

The windows on both ends of the house, next to the avant-corps, are of the “kibic-fenster” type.

On this photo of Dunavska street taken during the Great flood od 1876, we can see in a distance that the roof line of this house, had the same height as today, the lowest of all the surrounding houses, and probably the oldest.

On this photo, taken in 1907, we can see the facade much more clearly than on the previous one, and there are hardly any changes, compared to its present-day look.

On this hand-colored photo taken in 1907, the left end of this house’s facade is very detailed.

On this photo, taken in 1992, we can see the facade of the house after the reconstruction in the early 1980s, with hardly any changes.

We can see the Philigran craft shop and the inn “Ribar”.

On this color photo taken in 1995, the facade didn’t change much.

All the rooms of the shops on the ground floor are under vaults, as well as the pedestrian passage. On this photo, we can see this vaulted ceiling in the inn “Ribar”.

The traditional “kibic-fenster” window, on the left end of the first floor. 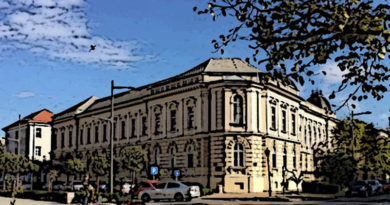 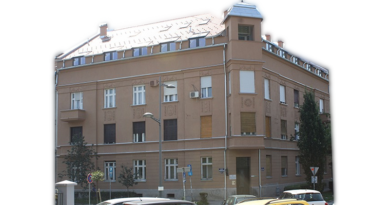