This two-story house, with a L-shaped floor plan, was built in 1852, by design of the baumeister Georg Molnar, for the owner Eli Ludwig.
On the 1745 map of Novi Sad there was a rectangular-shaped house, in its place.
The house was reconstructed in 1903, with significant changes on the facade, by design of the baumeister Anton Tikmajer, for the owner Josef Singer – at the time Montenegrin royal court photographer, and author of numerous photos we find on the old postcards of Novi Sad.

On the original 1852 blueprint of this house, signed by Georg Molnar, we can see that the gateway for vehicles was on the left side, and just a half of the yard wing had two-stories.

This house bears the Neoclassical style, with some features of the Historicism style, added in the 1903 reconstruction.
These features added in 1903 include the shop openings,  wrought-iron railing on the street balcony, the acroterions on top of architrave pediments, the row of decorative consoles under the cornice and the decorative roof parapet with a balustrade and Montenegrin code of arms.

On this photo of Dunavska street taken during the Great flood od 1876, we can see the facade with segmental arched gateway for vehicles and arched shop openings.

On this photo taken around 1900, the facade of this house much sharper, so we can see that the decorations around the first-floor windows are in the style of Romanticism.

This photo was taken after the 1903 reconstruction, and we can see that the first floor is very similar to its present look. On the ground floor the gateway  was functioning again, and a new decorated shop portal was added.

On this hand-colored photo taken in 1906, we can see no changes to the facade.

On this photo taken in 1930s, we can see that the Montenegrin code of arms was removed from the decorative roof parapet, while the otherwise the facade is unchanged.

On this photo taken in 1992, we can see the façade of the house after the reconstruction in the early 1980s, and it looks much like today, but with the roof parapet with balustrade.

All the rooms of the shops on the ground floor are under vaults, as well as the pedestrian passage.
The courtyard facades are radically changed in a 1990s reconstruction, with no commumication balcony and another storey added.

In the gateway we can see parts of the original tiling from the 1903 reconstruction and segmented arches in the old part of the gateway, while the new yard part is rectangular-shaped. 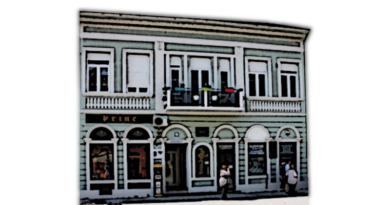 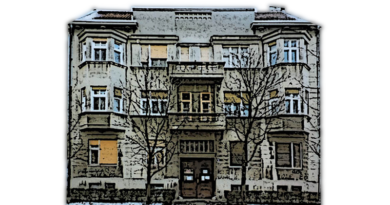 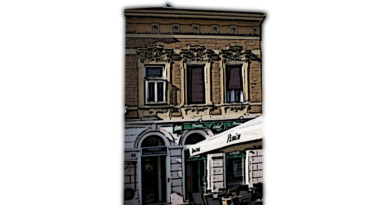